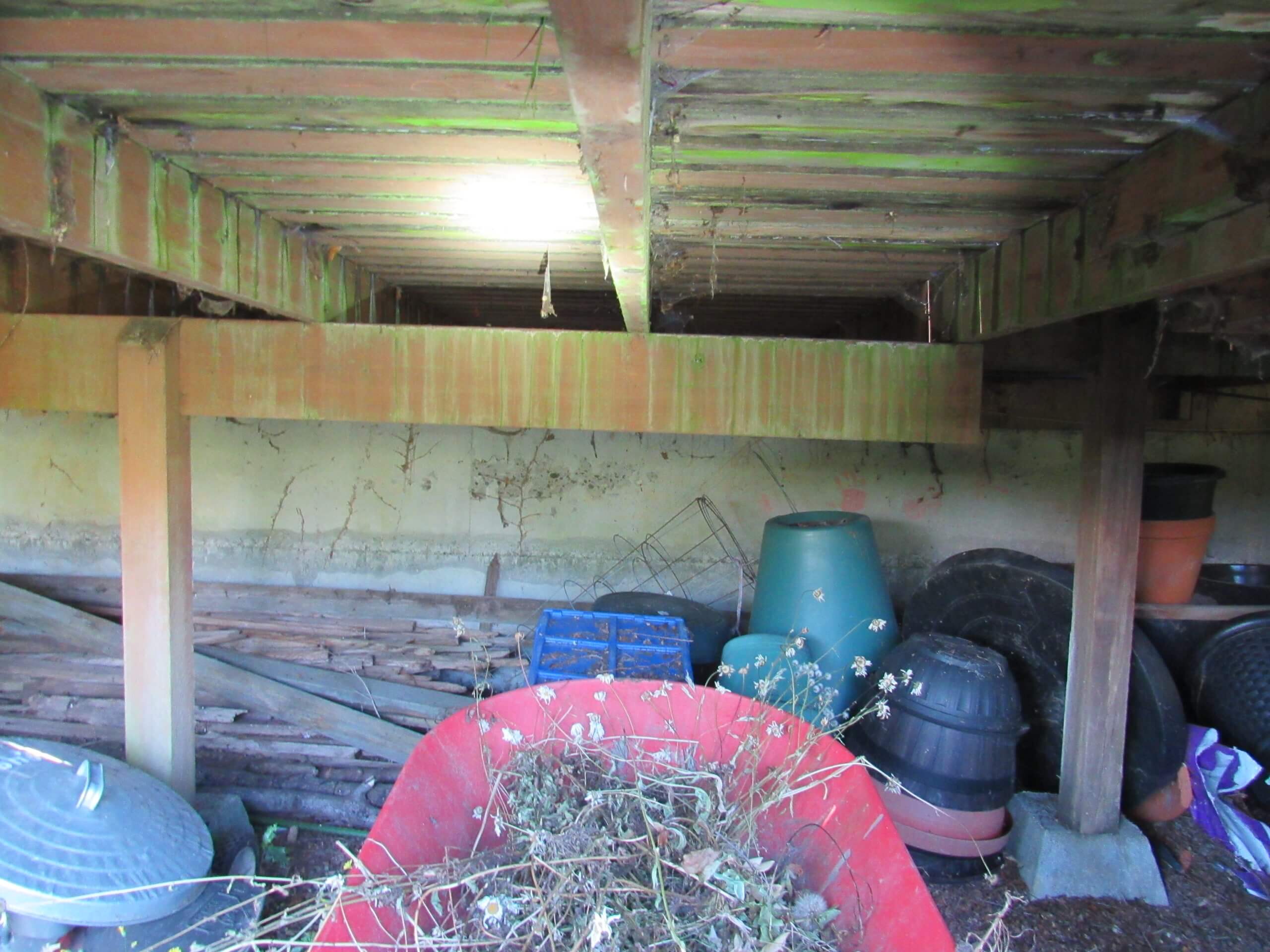 It has not failed to date…

Every home inspector has heard some version of this refrain at least once a week for their whole career. In this one, the claim in question was deck construction. The insistence that the deck was perfectly fine – because it had not collapsed to date – came at me from a stubborn seller who was advised by his attorney, in a for sale by owner situation, that he should shadow the home inspector and the buyer during the home inspection. He was also advised by me that these things seldom turn out well, but he chose to heed his attorney’s advice.

Why we have building codes

First: let’s begin with the realities of deck inspection. There is a reason we do not have structural engineers design every deck that gets built. This would be expensive. We can make it more efficient by having a set of engineered instructions for deck construction. If we follow these guidelines during deck construction home inspectors can look at the deck and know that it will be a safe and reliable deck. People often refer to these directions as building codes, but you can also think of them as directions. I like the Prescriptive Residential Wood Deck Construction Guide published by the American Wood Council. The version I reference is based on the 2015 IRC residential code. This is a handy guide that is universally accessible for even the most feeble minded. There are diagrams and everything. However, there is a Washington State amendment to residential deck design that requires decks be built to a minimum 60 pounds/foot. This exceeds the minimum span tables set out in this guide, so use caution with this guide if you are designing a new deck in Washington State.

If you build a deck, you can choose to follow these directions or not. If you do not, and someone asks a home inspector to look at the deck, the home inspector will not be able to determine, in good conscience, if the deck will perform as intended. We really have no idea, because …. you did not follow the directions.

It is true that residential construction codes change frequently and it would be equally true that if I were inspecting a 20-year-old deck, I would not expect the deck to meet modern prescriptive standards for deck construction. However, I would have been hired by my client to formulate an opinion of the condition of that deck and certainly, modern prescriptive standards would be one of many things I would add to my cocktail shaker of deck data to formulate my opinion. In addition to modern code, I would consider the age of the deck and other decks I have inspected of similar age. I would also pour into my shaker the quality of the materials used in the original build and I would inspect the deck for things like settlement, wood decay, flashings, positive connections, an adequate guardrail and continuous load paths to get a sense of how the deck has performed to date. Stirring this shaker of deck data, I would begin to develop an opinion of how reliable this deck will be for my client and how many more years of useful life they may hope to get from it. This is how home inspectors work. It is a process fraught with subjectivity, but those of us who do this work enjoy synthesizing mildly complex data and developing a professional opinion.

When the seller tells me the deck pictured below is perfectly fine because they once had 20-people on it . . .

The devil side of me wants to ask if he is willing to personally insure the deck? The guy with the pitch-forked tail wanted to say, “if you like, you could have your attorney draw up a contractual agreement that you guarantee this deck will last another 20 years, be totally maintenance free and if anyone were to ever get hurt on the deck for the next 20 years, you will gladly pay for all of their hospital and doctor bills, compensate them for lost wages and replace any damage to the property that might occur.” Naturally, the angel side prevailed and I tried to retaliate with data. Here is just a sample of some of the data I provided: 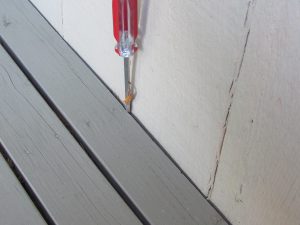 Because there is no ledger board, there is no flashing and water can get trapped between the deck and the house and cause wood decay 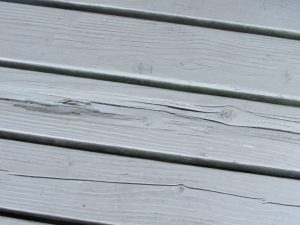 The deck is old enough that areas of localized wood decay were found. This indicates the wood decking is in the last phase of its useful life. 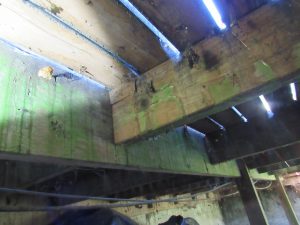 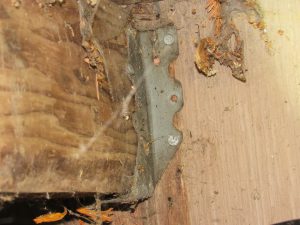 Hangers have been nailed directly onto the siding with no ledger board system. This is non-standard. Also, note missing nails in hangers 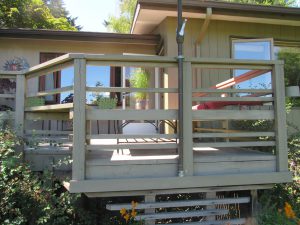 The guardrail is unsafe by modern standards – posts have been notched and openings are larger than 4 inches. 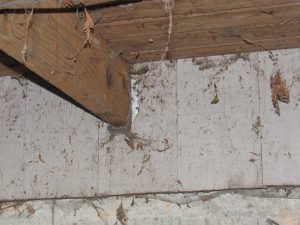 Joist hangers should not be nailed into the siding, but structural framing lumber. 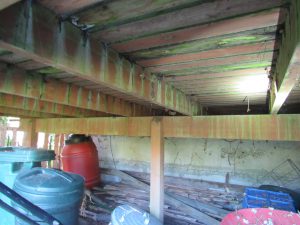 Add to that the wood has been out in the weather for 20-25 years and parts of the deck are starting to decay.

My advice to my client was that deck replacement would be more cost-effective than repair.

Anecdotal evidence like this of past performance, which cannot really be verified in any reliable way is about as useful to the new buyer as a hole in the head. I don’t know what will become of my advice. I know that the seller, upon hearing my series of professional observations said, “well, I guess we are all going to die now.”

This is frustrating to hear as a home inspector. I am not trying to be mean to you or your deck Mr. Seller. I am just doing my job. The reality is, there are millions of unsafe decks that do not collapse and hurt or kill people, but many do. According to statistics compiled from the CPSC, 224,000 people were injured nationally due to a deck or porch in the five-year study period that ended in 2003.

Our job as home inspectors is to respect the standards and the codes and report on those things we find deficient. If you inspect one deck in your career, there is a good chance no one will ever get hurt on it. If you inspect 5000 decks in your career, it starts getting more certain the people will get hurt on at least one of those decks. The same applies to other home safety concerns, especially stairs and electrical.

As home inspectors, we need to work together to educate the public about what we are doing and why we do it. Our jobs are important and we can save lives by being diligent, knowledgeable and thorough. Don’t let your guard down and don’t listen to irascible sellers that do not understand our job.

Scribeware is simple inspection report software that allows you to write quality, expert reports quickly and easily. Built by a team of veteran home inspectors with extensive built-in comment libraries, access to templates built by industry experts, and an intuitive, interactive, and easy-to-read interface, it is designed to take your inspection business to the next level.