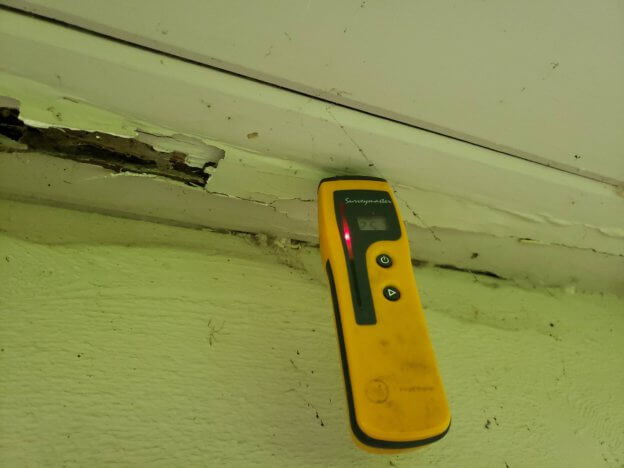 Is My Roof Leaking?

If you are a home inspector, you have experienced the amazing reflective properties of PVC and EPDM, white roofing membranes. In the summer heat, with some of the more traditional (older) modified bitumen black roofing membranes, you could burn your hand when getting onto the roof for inspection. By contrast, I have climbed onto a PCV membrane roof on a nearly 100-degree F day and the roofing membrane was still nearly cool to the touch. Needless to say, this has huge benefits when it comes to cooling loads and comfort in a home, as well as the benefits of reflecting the damaging UV that degrades roofing materials so quickly. But it can have some downsides. While these new white membrane roofs are clearly the future of low-slope roofing, I had an inspection experience the other day that is worth discussing. The inspection was of a 1960’s era house with a low slope roof, a car decking roof frame, and a PCV roofing membrane. If you are unfamiliar with car decking, this is the tongue and groove wood that is usually 1.5-inches or even 2-inches thick. It derives its name, I am told, from its more historic use as the decking for railroad shipping cars. In the case of this house, the owners had a professional roofing company install a PVC membrane style roof roughly 4 years ago and I was asked to come out and inspect the roof as they were concerned that it was leaking, even after the roofing company had come out several times to inspect the roof.

The Roofing Membrane Looks Fine, but…

Visual inspection of the roof membrane did not reveal any obvious installation issues or places where the roof could be leaking. I guessed that I would discover this as the clients had said the roofing company had been out more than one time to inspect the roof for leaks. However, when I viewed the roof from the eaves, I could see obvious problems. Tannin stains were running down the side of the house, especially on the north aspect. Fungal rot was noted in the car decking in places and my moisture meter was telling me that the wood was wet to saturated. Inside The House Tested Dry

Where is the Moisture Coming From?

The inspection was performed in the wintertime; it was roughly 42 degrees F outside at the time of inspection and it had been near freezing at night. While I did not do the destructive testing work required to verify this, my guess is that the moisture was from condensation. This video from the UK, while a bit long-winded, shows some destructive testing of a condensation problem on a flat roof and covers some of the basic principles that were likely at work with this particular house. Also, this illustration below by Charles Buell provides a nice visual illustration of this common problem.

The critical element here, that I suspect was overlooked by the roofing contractor, is the vapor barrier, or vapor control layer, between the foam insulation and the car decking ceiling. It is worth noting that more air goes through car decking than water over Niagra Falls. If this ceiling is not reliably air-sealed, warm interior air will move through the ceiling, and the insulation and condense on the first cold thing it hits, which is the roofing membrane. With water on the underside of the roofing membrane, it will run down the roof until it can find a place to run out, which in this case seems to be at the eaves.

While these principles apply to many types of membrane style roofing systems, these white membranes are especially vulnerable to this problem because the membranes stay so cold and even more vulnerable when installed over a car decking ceiling system due to the potential for air leakage.

We all know to watch for signs of moisture control problems on roofs, but do not assume that moisture control problems are roof leaks. Condensation can cause more serious problems than roof leaks and it is typically more difficult to diagnose and frequently overlooked even by experienced roofing contractors. Remember that few if any roofing contractors are schooled in the basic principles of building science. This can lead to a lot of confusion and finger-pointing when trying to understand mysterious roof leaks such as this one.